Tim Berners-Lee: Father of the Internet

Timothy Berners-Lee, also known as "TimBL" or Sir Timothy Berners-Lee, is an English-born computer science expert. He is famous around the world for being the person who invented the World Wide Web. He has a degree in Physics from Oxford University and numerous awards and honors, including the title of Knight and the Order of Merit. In the 2012 Summer Olympics he participated in the opening ceremony using a NeXT computer. He is currently involved in a number of causes, including the fight for Net Neutrality and efforts to make data from the United Kingdom's government open to the public.

Born in London, England on June 8th of 1955 to Conway Berners-Lee and Mary Lee Woods, Timothy John Berners-Lee is one of four siblings. Both of his parents were mathematicians and computer experts. During his childhood, his parents were employed at Ferranti International, where they worked with the world's first computer made for the commercial market, the Ferranti Mark 1. He received his primary school education at Sheen Mount Primary School and then graduated to Emanuel School, a private school in the southwest region of London. In 1973 he began attending the Queen's College, which is a part of the prestigious University of Oxford, and graduated in 1976 with a first-class or top-level honors degree in Physics.

Upon graduating from college, he worked at a number of places. This included the Plessey Telecommunications, which was his first employer, then D.G. Nash, where he wrote printer software. It was in 1980 that he got a contractor position at the European Organization for Nuclear Research, also known as CERN. While there, he built a system known as ENQUIRE which was designed to transmit a primitive version of Hypertext data. He returned to CERN in 1984 and in 1989 he proposed the idea that would evolve into the World Wide Web. In August of 1991 the first website came online, and he became known as "The Father of the Internet."

In 2004 he was made Knight Commander of the Order of the British Empire in recognition of his contributions to modern technology and became Sir Timothy Berners-Lee. He also received the Order of Merit in June of 2007. At the 2012 Summer Olympics in London, he tweeted the message "This is for everyone" during the opening ceremony. The message was displayed with the help of "pixel paddles" used by over 70,000 audience members in the stadium.

Sir Timothy Berners-Lee currently resides in the United States. He was at one time a member of the Anglican Church of England, but is now a Unitarian Universalist, having joined a Universalist church in Boston. He has been married three times and has three children from his second marriage. 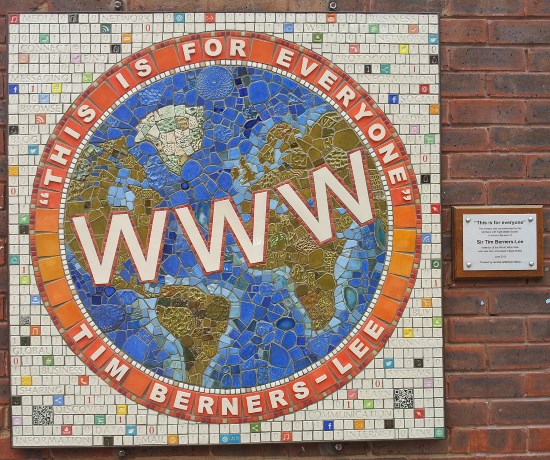 The WWW is for everyone. Mosaic by Sue Edkins at Sheen Lane Centre to honor Tim Berners-Lee. Photo by Robert Smith.

In addition to being Knighted in 2004, Sir Timothy Berners-Lee has received numerous other awards, honors and commendations. He joined the World Wide Web Hall of Fame in 1994, received the "Software System Award" from the Association for Computing Machinery in 1995. He received an appointment for an Officer of the Order of the British Empire (OBE) in 1997, and in 1999 Time Magazine honored him in their "100 Most Important People of the 20th Century" list.

In 2011 he received the annual Mikhail Gorbachev award and an honorary Doctor of Science degree at Harvard University. The Internet Society inducted him into the Internet Hall of Fame in 2012, and in the same year he was invited to participate in the 2012 Summer Olympics. He has been elected a Fellow of the Royal Academy of Engineering, the Royal Society of the Arts, the American Academy of Arts and Sciences, and the British Computer Society. He has received additional honorary degrees from Lancaster University, The Open University, Yale University, and the Rensselaer Polytechnic Institute, among others. He's been given Honorary Doctorates at the University of Manchester, the University of St. Andrews, and the Vrije Universiteit Amsterdam. Most of this is due to his research that led to the invention of the World Wide Web, which revolutionized the Internet.

Berners-Lee founded the World Wide Web Consortium, also known as the W3C, in 1994, and the World Wide Web Foundation in 2009. In the same year, he was elected to the United States National Academy of Sciences. He also joined the Open Data Institute, where he became President in 2012. He is also a member of the MIT Center for Collective Intelligence and the MIT Computer Science and Artificial Intelligence Laboratory. In the latter organization he holds the Founders Chair position.

The first web server ever known to exist was created by Berners-Lee. Dubbed the "CERN httpd", it was a NeXT Computer running the NeXTSTEP operating system, and it first came online on December 25th of 1990. The web server software was made using the C programming language and Version was 0.1, released in 1991, was the first release to the public. The source code was made available via USENET on the newsgroup called alt.hypertext, and it was also available via File Transfer Protocol (FTP) from CERN.

Sir Timothy Berners-Lee is currently involved in a number of projects. He is a part of the Alliance for Affordable Internet, whose goal is to bring access to the Internet to everyone worldwide. Through the W3C, he is also working on the Semantic Web, a new way for computers to manage and process data. His ongoing association with the Data.Gov.Uk and the Open Data Institute is an effort to make certain types of data free and openly available for public use, for instance non-personal government data in the UK. He is also involved in advocating for Net Neutrality, a principle which calls for all Internet service providers to transmit Internet data without discrimination.